You get a free book!

At an upcoming event I’ve agreed to talk about the genre and need to start getting my thoughts in order. My new series, Sky Realms Online, is lite litRPG. But what does that mean? 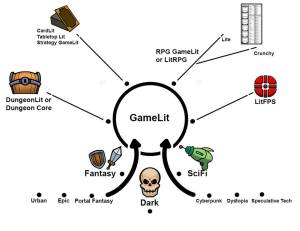 I’ll start off by saying that I didn’t generate the graphic. Lars Machmuller in the Gamelit Society Writer’s Workshop Facebook group created it, based off one started by Blaise Corvin (writer of Delver’s LLC). It’s a great way of highlighting the different subgenres of Gamelit.

But what is Gamelit? It can be science fiction or fantasy, any of those subgenres, but it has to involve some kind of game element. The best and most well known example of Gamelit is Ready Player One by Ernest Cline. In that story, the main character spends as much time in the game world as he does the real world and the plot of the story revolves around actions in the game world. That’s Gamelit in a nutshell.

From there it gets broken down into the subgenres listed in the graphic. All of them involve the different types of games. Role playing games, first person shooters, pokemon-style, etc.. Most of the books involve a VR (virtual reality) system that gets the player into the game. Some involve the player getting trapped and unable to log out (an early example of this is the classic Tron, which was gamelit).

Sky Realms Online is a litRPG. This means that it takes elements from computer Role-Playing Games (RPGs) and incorporates them into the book. This could be single player games (Elder Scrolls: Skyrim, Dragon Age, Dungeons & Dragons) or Massively Multi-Player Online Role Playing Games (World of Warcraft, Ultima Online). Those elements include character progression (leveling), classes, skills, dungeons, gaining experience and so on. What makes it different from a Dungeons & Dragons book (Forgotten Realms, Drizzt) is that the numbers matter and appear in the book. You read when the character levels and get details of what exactly that means.

It’s like reading a quest in World of Warcraft.

The two types of litRPG involve how much of those elements are detailed in the book. Lite and Crunchy. Lite is pretty self-explanatory. The numbers exist and are shown, but not as often or in as much detail. You may not get every bit of damage done to the characters or the monsters they face. You many only see the character sheet once or twice. Crunchy is what the more detailed, number-crunching, books fall under. These are for fans of numbers and stats and tables.

There’s a broad range between the two.

As a player of RPGs and MMORPGs, I never really cared for the number beyond “this is higher and an upgrade over my current weapon”. That helped determine what type of litRPG I was going to write.

So that’s gamelit and litRPG in a nutshell.